Last week I attended an utterly delicious beer and food matched dinner hosted by Beavertown Brewery, Dogfish Head and Charles Wells held at Duke’s Brew and Que, just off Kingsland Road in north London. Below are my thoughts on the challenges involved in holding events like this along with my review of the dinner itself. 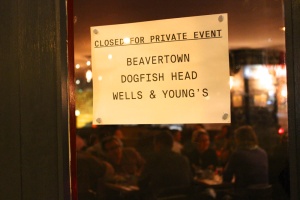 You can’t be half hearted of half arsed if you’re holding a brewery dinner. The beers have to be tip top and the food pairings have to go beyond neutral matches where neither beer nor food interferes with the other’s flavour. That said beer and food matching is not an absolute, neither in the creation   of   matches   nor   the   way drinkers/diners experience them, and it’s doubtful whether everyone you feed and water will approve of all the matches. A 50 – 75% success rate means you’ve done well! But there’s nowhere to hide. You need to know the flavour of your beers inside out and those beers need to be consistent – if you can’t brew exactly, identically the same beer each time then a brewery dinner will show up that weakness almost more than anything else.

It is, therefore, no mean feat to pull off a brewery dinner where both beer and food dance and sing. I went to a Fordham & Dominion one held at Heston Blumenthal’s Hinds Head pub in Bray (I won’t forget the marvellous Devils on Horseback and Dominion Oak Barrel Stout pairing in a hurry and the way the smokey bacon boosted the chocolate flavour in the beer) – and organised expertly by the UK importers of the beers Heathwick Ltd. No surprise that I’ve accepted an invite to a Thanksgiving beer and food paired dinner they’ve invited me to this year then.

But that’s the Americans, they’re used to this sort of stuff. Brewery dinners are far from unusual in the USA but are the UK’s breweries really up to it? Enter Beavertown…. (I can’t believe I actually just wrote that). Not only did they pull off a stunner but this was a ticketed event (rather than a PR/press only thing) priced at £75 per head – and it was packed out.

Arrival drinks consisted of a bottle of Dogfish Head’s famously hoppy 60 Minute IPA (6%), which seems to taste a little more British every time I drink it, but it’s soon blown out of the water as we sit down to eat a dish that is sheer genius in flavour, presentation and beer pairing. Crab Mac & Cheese matched with Beavertown’s Earl Phantom (3.6%) – a Berliner Weisse style sour including Earl Grey tea among its ingredients. The beer is pleasantly like drinking a lemon meringue pie in its combination of tart citric and lactic sourness through which bergamot flavours emerge. It stands its ground with the heavenly concoction of crab meat, cheese and pasta served in a crab shell and acts much like a squeeze of lemon juice across the top. Once the flavours combine the beer is positively lip puckering and the perfect, palate cleansing foil for this rich dish. If I’d had to go home after this course I’d have gone home more than happy!

We have a couple more Dogfish Head beers. DNA (4.5%), their collab with Charles Wells, now features more hops. I thought it drinkable in a traditional bitter kind of way in its previous incarnation but it does seem a bit more flavoursome now. I would have liked to try the Cote De Bouef Philly Slider topped with a Fried Quail’s Egg with the DNA (had I not drunk all of it before the food came out) as well as the official pairing with Dogfish Head Midas Touch (9%) which is apparently a hybrid mead-beer-wine based on a 2,700 year old recipe from Turkey. It’s a sweetish beer with clove and vanilla flavours that reminds me of Belgian pale – not my favourite style. The ‘Slider knocks back its sweetness and is, in any case, so good that I’m not thinking too much about the beer.

The next course puts me in a quandary as it involves a beetroot-pickled egg. I’ve long avoided maroon foods such as beetroot, red onions and red salad leaves because they produce an allergic reaction around my mouth which apparently makes me look like The Joker, but I can’t bear the thought of not trying Beetroot-Pickled Egg wrapped in Sausage Meat & Black Pudding, Crumbed and Fried, Served with Bacon Dust & Tarragon Hollandaise. Sounds a mouthful? Wait till you taste it!!! It’s paired with Beavertown’s Blackberry Gose (4.8%) – a kind of salty, sour wheat beer which reminds me of rhubarb and custard sweets including the fizzy, sherbetty flavour. The beetroot-pickled Scotch egg brings on a massive, perfumed, meaty flavour explosion which made me scribble, “Fuck me, that’s an eyebrow raiser,” in my notebook probably because of the stunningly good effect of dipping a Scotch egg into herby hollandaise and sticking bacon dust to it before putting it in your mouth.

In lesser establishments this might have proved to be mere pretentious nonsense but not at Duke’s Brew and Que. This deliberate method of eating, which we’ve been instructed to undertake, is an act of flavour. If you can believe it, sipping the Blackberry Gose after eating this actually has a calming effect and the fruitiness of the beer is a delicious contrast to the rich, fatty meat surrounding the egg.

After this we’re given another Dogfish Head beer. A palate cleansing, zingy little Berliner Weisse-style brew called Festina Peche (4.5%). It did the job but was too cidery for my liking.

Then there was Beavertown Smog Rocket (5.4%)… in cask. Imagine the smoothest, most chocolatey beer you’ve ever had and then times it by 10. Sigh. It was paired with Pork Rib, Smoked Beef Rib & Brisket served with Mash, Lemon Chilli Broccoli and BBQ Jus – and the smokey, meaty barbecue – and chilli – flavours boosted the chocolate and smokey flavours in the beer. It was like a carnivore’s wet dream.

Dessert? Who cares. There was a delicate little panna cotta and a chocolate terrine served with inventive, tasty interesting sauces and paired with Wells’ Courage Russian Imperial Stout (10%). If you have a sweet tooth I’m sure it was heaven but, for me, after the Crab Mac & Cheese, the Beetroot-Pickled Scotch Egg and more meat than you could shake a stick at – each perfectly paired with an amazing beer, dessert is the last thing on my mind.

Even the excitement of the release of Beavertown’s Bone King double IPA (8.5%) – a collab with Spanish brewer Naparbier – didn’t touch me after the dinner I’d had. I bid my farewells to my fellow diners and to my hosts and floated off to the train station high not only on the beer but aloft on a flying carpet of flavour sensations.

British brewing may be booming, but if we want to keep it that way we have to step up a gear with our beer and food matching efforts. If you want a delicious lesson in how to put on a brilliant beer dinner look no further than Beavertown Brewery and Duke’s Brew and Que.