Busy journalists can make lousy bloggers if the blog is not a paid gig. So apologies to those who enjoy this site and have felt hard done by at the lack of posts. The good news, as I say, is it’s because I’ve been busy with paid work – much of it writing and which I hope you might have had the chance to read. But I digress…

I managed a trip to the trade session at Craft Beer Rising, which was an enjoyable afternoon. I wish I could have stayed longer – and perhaps I should have. But what I really wish I could do with CBR is visit it as a punter would. But even going in as a punter, you can’t be a punter if you run into people who know you work in – and write about – the industry. (If you are reading this and you ARE a punter I’d love to hear about your CBR experiences so please share. Either drop me an email or comment on this post).

So, for me CBR is a mix of research, catching up with friends and colleagues and running the gauntlet of missing out on some beers in favour of others. Yesterday I tried to stick to the rule of only trying beers I’d never had before, ideally from breweries I’d never heard of. “That’s going to be hard for you.” commented one kindly friend – but I don’t try as much new beer as I’d like to!

Still, I came across an Italian outfit called Elav Brewery. Not only are their beers tasty, well made and extremely drinkable they’ve also started growing their own hops in Italy. Which, 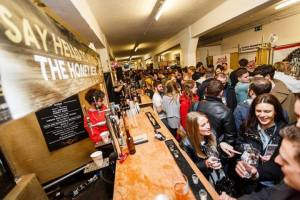 in case you’re not a hop anorak, is VERY exciting!!! (Hardly any hops are grown in Italy – at least not commercially).

My beer of the day was from a brewery I already know but it wasn’t one I’d had before. Kew Brewery (disclaimer: it’s run by an old drinking buddy of mine, David Scott, and we go back more than two decades) Sheep in Wolf’s Clothing (6.5%) was a dry as you like hybrid saison-IPA. I almost can’t tell you what was so good about it. It just sang. Starting dry and whispery like a French chanteuse and then giving way to a burst of citrus fruit as if the next verse had been taken up by Nina Simone. A beer worth talking about as well as worth drinking.

That sums up some of my favourite beer-drinking occasions. Delicious brews and the sort of company that likes to discuss them – which I suppose is what trade sessions at festivals are all about. But still I envy the real punters.