I’ve composed this post via my ipad so please forgive any quirks of layout I will edit for style and readability when back at my desk!

If you read part one of my review of Birmingham Beer Bash you’ll know I had a marvellous time and rate the event highly. But what of the beers? Well, here’s what I had to drink during my flying visit…

Celt Experience Brigid Fire Smoked Rye IPA (6.3%) keg I began with this because I wanted something that would match the pizza I was having for lunch. The man behind the bar thought it would work and we agreed the smoked elements of the beer could be good in combination with the wood fired pizza – but I could barely detect any smoked flavours in the beer. That said it was a tasty drop. An attractive opaque orangey gold coloured brew with a big, resiny, piney aroma and a fresh grapefruity flavour leading to a dry, malty payoff. It went quite well with the pizza which brought out the sweetness of the malt. 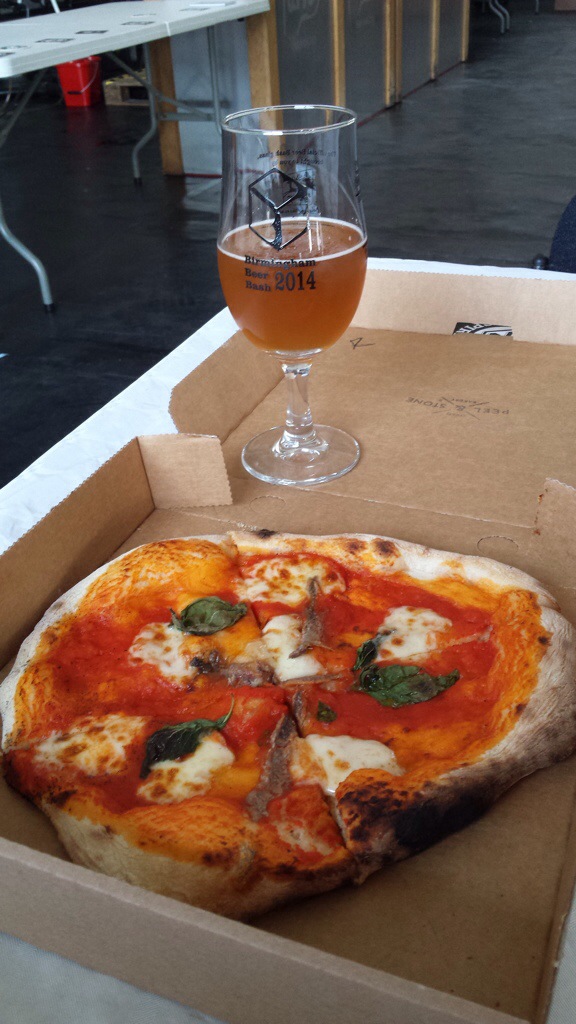 Next up I carelessly ordered some of Hardknott Brewery’s Squiddy (3.8%) keg and was shocked that it looked… well… green. One slight criticism I have of BBB is the lack of tasting notes in its beer list – but then again I know how hard it can be to gather such info in time to print a programme. I mention this here because I did not know the Hardknott beer had squid ink in it – although given the name perhaps I should have cottoned on! It didn’t make the beer black, as per squid ink pasta, though just dark green or murky gold when held to the light. The brew had a savoury, mineraly aroma which carried through to the taste and made me think it could have food matching potential but as a stand alone drink it lacked zest and wasn’t for me.

After two keg beers I decided it was time to hit the cask bar. While I was mulling over what to have my eyes alighted on a label telling me that Cheshire Brewhouse has made a beer called Sorachi Ace (6%) cask . Being a huge fan of the Brooklyn Brewery beer featuring and named for this hop I couldn’t resist (although I wasn’t sold on the Duvel Tripel Hop which featured it). The hop is renowned for bringing dill and lemon flavours to the beer but apparently some people also taste oak (yes, I looked that up in the Oxford Companion to Beer) and this is what I got when I tasted the Cheshire Brewhouse beer – so much so that I thought it must be barrel aged. But I’m getting ahead of myself. The beer was an utterly beautiful sunshine and golden honey colour – worth hanging on your wall although of course that would either be a waste of beer or it would just end up all over your carpet as you tried to hang it! A big, fruity aroma of apricots and peaches wafted from the glass and made the pronounced woody flavour of the beer a bit of a shock. It was an intriguing shock though that sent me back for sip after sip. It’s fair to say I was quite captivated by it. As well as the wood character the beer possessed a resiny bitterness with lots of piney notes and was very dry – but eventually the fruity aroma emerged from the wood to give a rather splendid jammy aftertaste. This was my beer of the festival

Just to be sure though I hunted down the brewer and interrogated him. No barrel aging, no wood chips, nothing like that at all. The beer was bittered with Magnum and then late hopped with ‘lots’ of Sorachi Ace including the use of a hop back (essentially a straining device that can also be used as a sort of infuser to add hops after the boil stage of brewing).

Freedom Brewery’s Barrel Aged Pilsner (5%) keg had a tough act to follow. This is the brewery’s standard pilsner which spends three months maturing in Glenfarclas Whisky casks that have previously housed bourbon – still with me?? Freedom isn’t the first to barrel age a lager in Glenfarclas casks as Harviestoun’s Orach Slie has also trod this path. The Freedom effort is subtle at first but whisky flavours build with each sip.

I decided to leave my trip to the designated Sours Bar, cleverly positioned next to the new Cider Bar to catch all those cideries who think they don’t like beer, until the end of my day. A man who didn’t like sour beers was working the bar – he clearly feared for his customers (not a bad thing!) offering a taste in case I didn’t like it when I asked for a third of Magic Rock Circus of Sour White Wine/Lychee (3.5%) keg . This little beauty is low ABV and gently sour in the Berliner Weisse style. As per the barrel aging it had an aroma of white wine. It was a very pale golden yellow colour and its refreshing tangy-ness was perfect for the blistering hot summer’s day Brum was having. I couldn’t really taste the lychees but I didn’t mind. This has got to be one to bring wine-lovers across to beer.

My last beer of the day (on site – I grabbed a can of Four Pure Session IPA (4.2%) for the train) was from a brewery I keep hearing of but had not managed to sample any beers from. Lovibonds Henley Sour Grapes (5.4%) keg was dusky gold and smelled like a rhubarb fool. Softly sour, it was tart, juicy and contained hints of redcurrant and raspberry followed by an appropriately cheesecake base biscuitty aftertaste. Another summer’s day joy and just the sort of beer I might have in place of a dessert. I can’t wait to sample more from Lovibonds.

And so my day at BBB was over just as other people’s evenings began. The start of the evening session began as a PA was cranked into life and the noisy but marvellous sounds of Birmingham’s own Black Sabbath began to drift through the air. Sadly I had to leave just as the party was getting started but I hope to pay a longer visit in 2015.

The third Birmingham Beer Bash is already being planned and is provisionally scheduled for 23 -25 July 2015. Keep an eye on the BBB website for official announcements/confirmation.