You may recall Rachel Woolgar‘s post on her first ever beer festival which she wrote for me a few years ago. This is her take on her first time at GBBF.

A lot has happened since my last a guest post on this site. Since my visit to the Bournemouth Beer Festival two years ago I’ve attended Reading Beer Festival (for the last three years) and also the ‘Octoberfest’ in my hometown Basingstoke. Earlier this year I visited Munich and immersed myself in its beer culture at both outside beer gardens (the English Garden was particularly impressive) and vast, impressive Bierkellers. I’ve indulged in a box of delights from Beer Hawk in the form of some seriously strong IPAs and when visiting towns and cities in the UK made sure I’ve done my homework to visit any good real ale pubs. I also scour the supermarket shelves for new beers and ales, largely with mixed results.

But I still hadn’t made it to the Great British Beer Festival… until now.

My job recently relocated to London so it seemed too good an opportunity to miss. The night before I did my homework on the festival website (see left).

I found the beer finder feature (which asks you to select beer colour, strength and style) particularly useful and easy to use. It recommended a long list of things I should try and it was reassuring to see some there I’d already previously had and enjoyed. If I’d had more time I probably would have made a few notes or printed this out to take along.

I’d visited Olympia before for various trade fairs over the years but had forgotten quite how immense the space is. It felt quite overwhelming at first trying to orientate myself and I was glad to have Sophie on hand to talk me through what was where (and of course to know where the toilets were!) as the scale was grander than I was used to. A cacophony of noise hit me when I first arrived which was quite disconcerting, but once you tuned into it you knew it was just people having fun and I soon acclimatised to it. 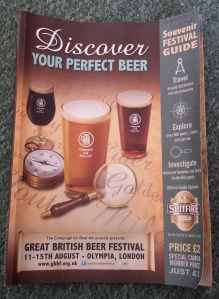 The set up differed to most of the festivals I’ve experienced so far in that in addition to ten brewery bars (St Austell and Fullers etc) the rest of the bars were organised alphabetically by the county of the brewery and given imaginative names like ‘Apollo’ and ‘End of the Rainbow’. The map in the souvenir guide proved invaluable in finding the bars once you’d decided on what drink you wanted to procure. The guide was easy to use and provided good, but occasionally misleading, tasting notes. But it’s all subjective, right?

The staff were friendly and did their best to ensure you weren’t waiting too long. I didn’t have to call on any of their advice or knowledge having Sophie to hand! Had I been there with friends I probably would’ve relied a bit more on their recommendations as this has proved successful at other CAMRA festivals. 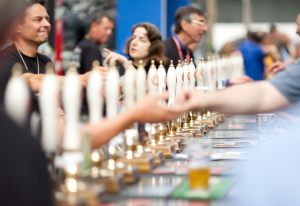 The punters seemed a friendly and well behaved lot too. I was even bequeathed a sombrero hat at the end of the night. (Thursday is ‘hat day’ but some punters were a little premature with this). The majority were men age 20-50 but it was nice to see a lot of women there too. I didn’t spot any large all female parties but if I’d come with a group of female friends I think we’d feel welcome.

There seemed to be enough seating if         you searched around a bit and people were not discouraged from bringing their own (I saw a few picnic chairs set up in quieter areas). The seats at the far end of the main food area in the National Hall provided slightly more of a haven if you wanted to have a proper conversation – but the downside was being down wind of the smell of roasting meats!                                        (More like burning sausage fat if you ask me, Ed.)

I managed to try several different brews during my visit (which you’ll hear about in a separate post) but woman cannot live by beer alone so we sampled some of the various foods on offer. My tip here is that later in the evening larger portions or freebies seem to be offered. We snagged a delicious mezze style platter from a very nice man at Olives and Things comprising vine leaves, olives, hummus, flatbread and the most delicious tapenade I’ve ever tasted – and as he was running low on flatbread he gave us the whole plate for free! Next door at Truckle Cheese we bought a cheese plate and as supplies of crackers had run out the stallholder slung on some extra pieces of bread. I also had some tasty real ale chutney from here.

GBBF seemed to me as though it ran like a well-oiled machine. There was plenty of choice and at reasonable prices, plenty of seating and all the facilities were well maintained too. All in all I very much I enjoyed the experience and will definitely go back next year.

You can follow Rachel Woolgar on Twitter (her beer tweets are quite funny) or look at some of her non-beer writing on her blog.