Guest post: What I made of Craft Beer Rising

If you like Sierra Nevada and getting caught in the rain… A FemAle View’s Rachel Woolgar shares her thoughts on her first Craft Beer Rising.

You may not believe it, but East London isn’t somewhere I immediately associate with the craft beer scene. But parking my prejudices against bearded hipsters – probably all riding penny farthings – I went to the Old Truman Brewery in Brick Lane – which has hosted the Craft Beer Rising festival annually for the last four years.

There was a long queue but fortunately it wasn’t made up of beardy weirdies with ironic facial hair and hessian totes of organic bread. Inside I was issued with a kind of beer glass I’d 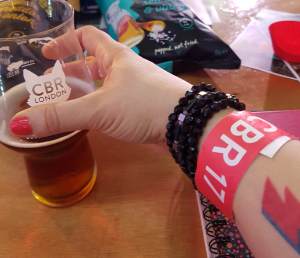 not seen before and not just because it held less than a pint. Seriously, it was the first beer festival I’ve been to where you couldn’t get a pint glass and that immediately set it apart from other festivals.

Glass at the ready, I suddenly felt trepidatious at having to navigate what seemed like labyrinthine halls to get to the beer. Once I began to look round that soon changed though. “Oh, there’s that beer I’ve been meaning to try!”, “I’ve heard of them.”, “Their beer is meant to be good.” I felt a bit like a kid in a sweet shop, so where to start?

Well, I was with Sophie and she was in Black IPA mode so I was dragged to Saltaire’s stall so she could get some Kala – which she loves. Luckily their Cascade Pale Ale (4.8%) was in the style of my usual. It felt good to start with a safe bet. My choice turned out to be spot on. Not too bitter, with a delicate grapefruit twang from the Cascade hops.

That said, what I enjoy about festivals is they make me step outside of my comfort zone. I’d happily sup IPAs all day, but for me the point of a festival is to try different things. In most of the pubs I go to IPAs and blondes are ten-a-penny and other styles rarer. So I stepped into the dark side with Harviestoun‘s The Mischief: Nitro Engine (4.5%). I’d say this ‘nitro beer’ is a good place to start if darker beers scare you – especially if you think they’re too heavy. It was creamy with a light body and had distinct coffee and chocolate flavours combined with a smidge of vanilla and caramel. There was also a wee hit of smokiness in the finish. A good nitro for beginners.

A self-imposed pale ale ban meant trying Fuller’s Montana Red (4.5%) instead of going for Wild River. I’ve not had many red ales before but I will now! My preferred citrus taste was still there, but also a good sweet maltiness – which I sometimes find overpowering in other beer styles.

I surprised myself by declaring my beer of the day Sierra Nevada’s Otra Vez (4.5%), a gose style ale. This was my ‘dancing beer’ (TM Sophie Atherton!) but was it because I’d had a few 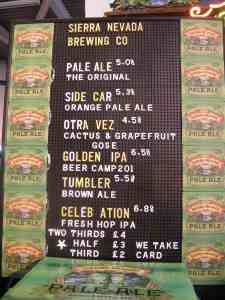 by then?! It was sour, yet refreshing and featured prickly pear as part of the recipe. I could imagine drinking this, well chilled, on a summer’s day.

One of the main differences between CBR and GBBF, from where my previous big London festival experience comes, was the chance to get up close and personal with the people who work for the breweries. I like hearing about their history and the stories behind the beers. They are also good at persuading you to taste a few of the more unusual brews. Such as Windswept’s Werewolf (6%), a chilli infused dark ale that uses habaneros for a subtle, spicy hit.

Key to a successful festival is something to soak up the alcohol, but I was disappointed with the food selection. Because I don’t eat meat or dairy the ubiquitous pulled pork and mounds of mac ‘n’ cheese were of little use. Where was the humble falafel when I needed it? I resorted to a bag of pitta chips – with which I was at least offered the chance to buy a decent sized tub of hummus for a quid.

Lack of food choices aside I liked the overall feel of the event – a high point was the modest queue for the ladies loos while the queue for the gents was, at times, biblical and oh, how they moaned!

As well as dozens of brewery stalls – essentially miniature bars – there were pop-up pubs from Fullers and Goose Island. The latter was packed out, the former more than half empty. Fullers was showcasing its new unfiltered London Pride (4.1%) and offering plenty of free samples – but I was underwhelmed by the taste. It was bland and forgettable.

The downside was a case of too many beers, too little time – partly because I didn’t realise last orders was at 5.30pm (and didn’t hear it called over the din of DJs). My pre-festival prep put a tasty sounding Tiramisu Stout and Adnams Earl Grey Lager on my hit list but I didn’t get to try either. 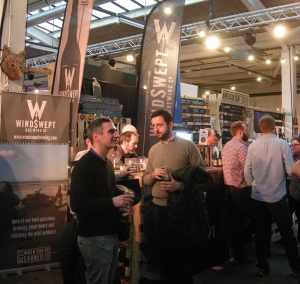 Still, the variety – different breweries and beers from different countries – and the chance to try different styles is marvellous. I like the way beer festivals like CBR bring everything together under one roof. I can probably find out more about beer, and discover more new styles, in one afternoon or evening than I could in a month down the pub – or at least in the pubs near me.