I wouldn’t go quite as far as to say this beer was ‘my Shangri-la beneath the summer moon,’ but it was extremely drinkable! I got the chance to taste it at one of Eebria’s trade tastings at their taproom in Bermondsey. A pale, dusky orange brew with a loose bubbly head it had an aroma of mandarin and passion fruit. It drank below its ABV, with a gentle carbonation that made it a bit too easy to put away. One of those beers where each time you take a sip you think, “Ooh, that IS nice,” then take another and another because it’s so tasty – and very quickly it’s all gone. At which point you sensibly order more so you can continue to enjoy its juicy mango and lychee tropical fruitiness.

There was a time when I drank Newcastle Brown Ale, or Newky Brown as we fondly called

it. Knowing what I do now about how clear glass compromises beer quality I don’t touch the stuff but I am fond of the style. Hence I was excited to try this new small batch beer from Hertfordshire-based Tring Brewery. American Brown ales, in common with US-style IPAs, are essentially American-hopped versions of the original style; although I believe there is now a move toward calling them Brown IPAs (!). A pale horse chestnut-coloured beer with a small off-white head, a promising pink grapefruit aroma entwined with toffee, caramel and a hint of blackcurrant. A decent grapefruity hop tang was the pay off on first sip; a flavour that persisted and intermingled pleasingly with chocolate-caramel malts. The only thing that detracted was that it perhaps wanted for bit more carbonation. 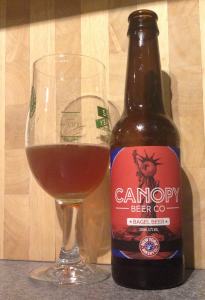 I heard about this beer in a press release about National Bagel Day. No, really, it’s a thing. Made in collaboration with the New York Bakery Co it claims 25% of the ingredients comprise the oddly shaped bagels they can’t sell. I rather like novelty beers because, much as I said in this post called ‘beer is the new sex’, it shows a certain respect for beer. As if associating something with beer makes it more desirable. Anyway, this was much better than I thought it would be. The colour of unpolished copper, it (unsurprisingly) offered up a doughy aroma with a yeasty bubblegum character. Initially tangy and floral, then more like liquid bread and honey after which a touch of marzipan flavour emerged. It put me in mind of Belgian dubbels. A bit too sweet for my personal taste, but don’t write it off as a gimmick before giving it a try.

If you try any of these beers after reading the reviews, or have already sampled them, do let us know what you thought…